When I launched this daily showcase of startups back in 2009 the idea came about because as a designer and entrepreneur I wanted to share the inspirations that affected me everyday. I noticed a commonality between CSS galleries and those with new business ideas looking to share their incredible designs. Back then the focus on UX and UI wasn’t as paramount as it is today, and only a few standout startups grabbed my attention. As a result New-Startups.com was born, a place to share new businesses that I believed in but also inspired me as a creative as well. Today those elements still impact every decision we make, from which startups we think everyone should be aware of but also imprint design that leaves a lasting impression amongst our growing team.

Airwalk Design is a new platform that I have begun to cling to everyday since it was submitted by 22-year-old founder Daniel Schwarz, from London, as a new source of creative enlightenment. As a designer I constantly look for articles and new platforms that capture my wonderment, curiosity and attention – upon first visiting this “Pinterest for designers” I was submerged into a visual wonderland that has me coming back for more and hoping for a growing community. Created to be a place to inspire, and be inspired, the site also has begun to harvest an educational corner to help those not quite there yet better themselves through articles and tutorials released every week. I asked Daniel: why did you create Airwalk Design?

“I felt that there should be a better way of being inspired; a seamless, infinite viewing experience that could theoretically go on forever, and the Pinterest concept created that.”

“We love Pinterest, it inspired us. We use it everyday. We feel that users should use Pinterest as well as Airwalk Design. But there are added benefits to our platform, and that’s the audience. Designers can get the expert opinions they might not receive on Pinterest, because it’s a niche-topic, everybody is a designer on Airwalk Design. There’s no need to filter anything either, because it’s 100% designs.”

The new creative platform for sharing and collecting design inspirations utilizes their targeted network of undiscovered writers with a specialty-knowledge in various forms of digital design – which they call “ambassadors” – to add layer of depth for new users to gain value from. Their mission is to inspire and spark thought-provoking reactions in the minds of designers worldwide. Airwalk Design is targeting artists and designers with a strong sense of ambition, whom can be the everyday designer, those starting out, and the hard-hitting professionals. There’s something for everyone. It’s a place where everybody is equal because of one reason: “we all have a mind, and the ability for it to be inspired by somebody else’s work.” 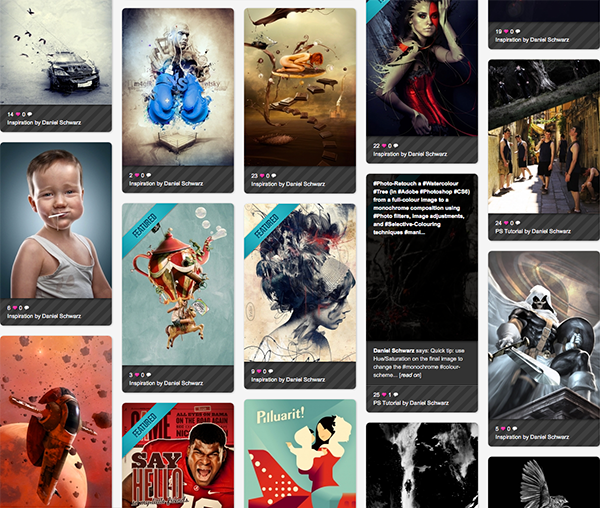 Very few design inspiration sites have affected me as well as Airwalk Design has. Scoutzie, Best Web Gallery, and Colossal are the most recent one’s to become part of my daily design intake, now Airwalk Design joins them and I hope it becomes another place for creative’s to share and inspire with other creative’s.