As artists and daily users of Paper, on the iPad, to sketch ideas and draw in general we ran into quite a few problems while relying on our natural tendencies of using traditional pen and pencil on a sketchpad. Resting one’s palm and drawing with either a finger or a stylus will inadvertently turn on multitouch gesture controls hindering the drawing experience and making us re-learn what’s comfortable when drawing. A frustrating occurrence, but one that does have a solution.

For $20, the Hand Glider changes everything; it lets an artist feel relaxed and be involved in their craft more readily when drawing – making using the iPad to draw enjoyable once again. The lightweight sleeve for your wrist and pinky acts as a barrier between your skin and the iPad’s multitouch gesture controls that prevents those unexpected tools and unintended marks from showing up on the canvas. 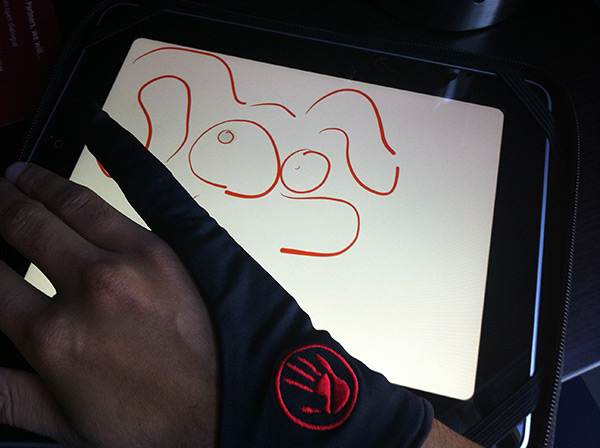 If you looked at The Hand Glider by itself it may look quite silly, but how it works far outweighs its awkward appearance. Joseph Bell, creator of the Hand Glider, tells us:

“The idea for the Hand Glider came to me one day after several days of frustration when trying to utilize my stylus with my iPad. I’m used to being able to rest my hand on the surface when writing with pen and paper. It was pretty hard trying to retrain myself not to put my hand down.

So, I wanted to come up with a way to eliminate the ‘hand in the air’ style of writing. This led me to the creation of the Hand Glider. I originally searched the Internet for a solution and I came across an item called the Smudgeguard. This was created for Wacom tablets. I read on their site that they did not work for iPads. During the creation of the Hand Glider I spent countless hours in fabric stores and warehouses trying to find a material that was lightweight, comfortable, stretchable, and able to prevent the capacitive connection between hand and iPads.

After brainstorming with a couple of friends, I came up with several designs. I ended up patenting all of them before settling on the design you see today. Essentially it’s the first of its kind (designed for capacitive tablets) on the market. I hope it brings new life to tablet artists and casual stylus/tablet users alike.”

While testing the Hand Glider, the biggest obstacle was just getting used to the idea that resting one’s palm was actually doable again. It turned out we’ve trained ourselves not to, but once we relax and do as we always had traditionally done when drawing, the positives of the product were very much apparent. Your hand gets much steadier, penmanship flows more easily, fingers don’t cramp, and what you intend to draw is what gets drawn – no more unexpected marks that need to be erased.

Using apps like Paper are much more fun with the Hand Glider. It’s a simple tool, but the right tool for every artist that loves drawing on the iPad.