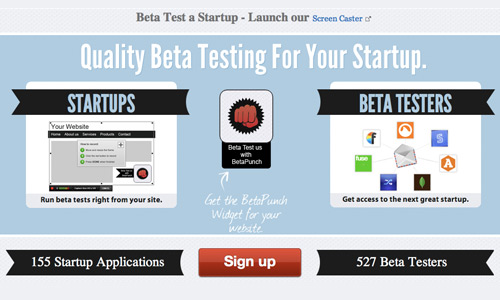 Are you a startup looking to get some testers on board to find out where your idea has flaws or where it can use upgrades? BetaPunch, is a Baltimore based new business that connects startups with beta testers, while letting them video record their screens and get paid to test.

Unlike other beta testing sites, like BetaBait and StartUpLift, BetaPunch adds a social and community component into its workflow. Testers can be rated by startups and their reputation can be boosted on the site for other startups to overview. Beta Testers can also be rewarded by the startup for providing sound feedback. So, if you are a startup founder, when should you use BetaPunch? According to founder Ross Nochumowitz:

“We are available at any stage of the process. Whether you just want feedback on a simple landing page to collect emails, your site concept, or if your web application is 100% developed. It doesn’t matter. Feedback is necessary at all stages of the game, but I think it is more important in the beginning stages of it.”

Currently 527 Beta Testers have signed up and have attracted over 150 startups such as Dvour, Crowdtilt and Resumonk. Check out the video here to see a Pinstagram beta test. We were lucky enough to meet up with Ross and discuss what goes into successful beta testing and how BetaPunch is making the process easier with useful feedback for startups.

Who is Ross Nochumowitz?
I am the founder of BetaPunch.com. I studied communications and Media Studies and played lacrosse at Goucher College (a small liberal arts college in Towson Maryland). I have always had a passion for Internet startups. My full-time job is as a licensed bail bondsman for my family business Big Boyz Bail Bonds in Baltimore Maryland.

In my spare time I spend most of my time reading startup news, promoting BetaPunch, and working with my developers on improving my service and user experience.

How does it help startups?
BetaPunch is a tool that helps startups get video recorded feedback from beta testers or early adopters. Startups get to physically view users interacting with their website, and listen to them voice their opinions about various elements of their service or site.

I feel like written feedback doesn’t really motivate the startup founder to iterate and make improvements. In a lot of instances, with written feedback, you can’t see the whole picture. With video screen recorded feedback, it’s as if you are sitting in the room watching an unbiased person review and navigate through your website. 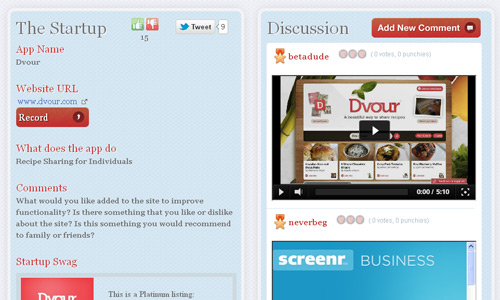 Why did you start BetaPunch?
I started BetaPunch when I read about an article in TechCrunch that featured a site called: BetaBait. Here is the link to that

The site, at the time, inspired me because I really thought the idea of connecting startups with beta testers solved a significant problem for the startups. Startups can’t get off the ground without users. And they can’t get an idea if their product will be successful without user feedback. I also knew there was no shortage of startups being born on a daily basis so I knew the market was growing for a service like BetaPunch.

I thought the idea was brilliant, but their execution was sub-par. I figured I could execute better in various aspects. I truly believe ideas are worthless if you can’t execute on them which is what ultimately motivated me to create BetaPunch. So many people think in order to have a great startup business you need to have the most original idea that nobody has ever thought of before. That is just not the case. Look at Google; they were not the first search engine. And look at Facebook; they were not the first social network. They are just doing it better than everyone else!

We are currently developing a widget that startups can embed directly into their websites and get video recorded feedback without the tester needing to come to BetaPunch first. The widget will allow the startup to offer their own unique incentives for beta testing as they pertain to their startup.

The tester will be able to launch the recorder, run their test, then copy and paste the link they are given back into the widget. All beta tests submitted via the widget will be posted directly to the startups discussion page on BetaPunch to view at any time.

This will allow for more targeted feedback as the user will have found the startup’s website on their own due to their personal interest in it (not because they heard about it on BetaPunch or some other startup listing website).

How does BetaPunch work?
BetaPunch is simple. Once you sign-up you can act as either a beta tester, startup owner, or both. As a beta tester you can either discover new startups via our search function, gallery and our daily email blast. Or, if you have a startup, you can submit it to our database for free. As a startup owner you will be given your own discussion page for beta testers to launch our screen recorder from and submit feedback to.

In the near future, startups will no longer be able to submit their startup for free. However, all startups who signed up prior will remain on the site and get access to our widget free for 30 days for being early adopters of BetaPunch.

The pricing for the widget and listing on BetaPunch will be $30 for a 30 day testing period and will allow up to 30 video reviews by beta testers. Once you submit your startup to BetaPunch your listing will remain on our website as long as you want it to. You will only have to renew the code for your widget every 30 days. 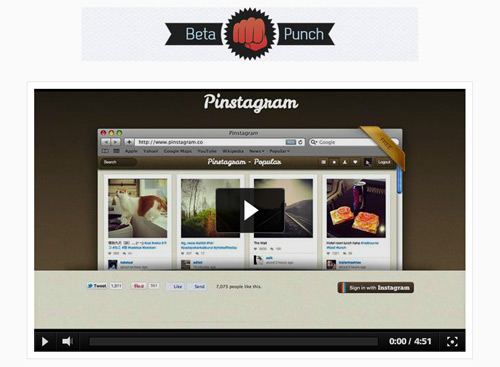 What do Startups do wrong when testing? What could they do better?
Often times, startups are showing their products and services to the wrong people. Many startups don’t do real beta tests. They simply show their family and close friends what they have and of course they all tell you that they like it.

Another mistake startups make is not showing their product quickly enough to potential users. They spend so much time and money developing before they know if there is any actual interest in what they are building. It is so important to create the most basic version of your service or site, MVP (minimum viable product),and do tests before you dig yourself in too deep of a hole.

Remember, you don’t need to have a programming or tech background to offer feedback for a startup. In fact, that makes it worse if you do. Startups get the best feedback from potential users and customers – not programmers.

Are you an experienced business or entrepreneurship writer? Enquire about submitting a tech guest post today.