Plenty of to-do list applications exist on the App Store, some herald infinite features, while others focus more on simplicity and clever interface design. Some of the task organization apps on the market are better than others, but we find those that hone-in on simple design with scaled back feature sets win because they help you focus on what is needed instead of being over-run with what tool to use in the application. 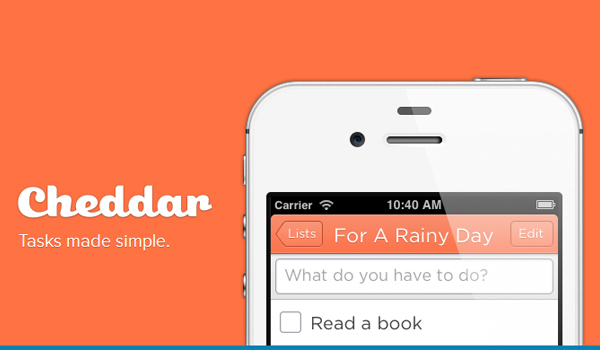 Cheddar is a new app that boasts simplicity in design (similar to Clear), but with a few more features. The app strips down to-do lists into its most original form, like when we only had a pen and paper to use. There is no time or date settings needed, just the task you want to do and a check box to mark if its completed or not.

Besides just a simple text editing for the to-do lists you create, Cheddar adds hashtag and HTML markup opportunities to organize, design and add links to tasks. The hashtag system is pretty much just like you would see in Twitter and comes in very handy when trying to organize tasks or find those with similar tags.

HTML markup on the other-hand gives the opportunity to make items bold, italic or a different color. A Pretty essential function when making a list that needs certain items to be more prominent then others. Hyperlinks can also be added to tasks, thus letting you do almost anything to your text.

Probably the biggest feature that sets Cheddar apart from other to-do list apps is its ability to synch across multiple platforms. With Cheddar, your tasks are instantly everywhere. Everything you do with Cheddar pushes to all of your devices, so your world is always in sync. It’s really magical to create a task on your iPhone and have it instantly be on your computer without thinking about syncing.

Cheddar does what many to-do list app’s fail at – making it simple to use. By simply having to type and hit return, writing a task to be completed becomes its most primal state and to us that is the state it should be at. Most app’s try to fill up with features, while Cheddar does a magnificent job at scaling back with pixel perfect design and minimalistic features that help you stay organized.