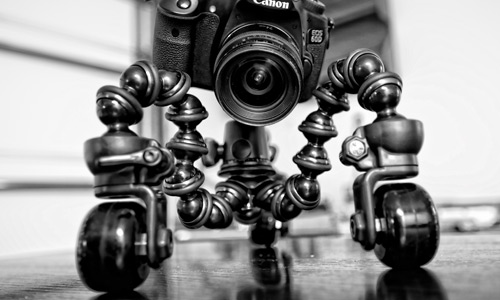 CineSkates is a Kickstarter project that achieved its $20,000 goal in a day and has received over 1,400 backers with an astounding $331,497 in pledges with 7 days to go. When first hearing about CineSkates it was hard to understand why you would need to put a camera on a tripod for low level shots – would there really be enough locations and opportunities to use the invention to make it worthwhile? Well, check out the video below and see for yourself.

If you watched the video you can see why the answer is “Yes”, there are tons of options and video production opportunities for an invention such as this. The fluid, rolling video opportunity creates some very stunning footage and is put together very simply: A set of three skate wheels attach to a GorillaPod Focus of which you bend its legs until the wheels line up the exact way you want. Then you use a ball-head to set the camera angle needed in order to start shooting some fluid video.

“CineSkates can produce shots that have previously been impossible or only possible with bulky and expensive equipment. Here are a few:”

Being able to create swooping and curving shots without a dolly, but with a compact simple, clean and elegantly designed piece of technology is surely going to make every videographer want to get their hands on CineSkates. By simply pledging $150 to the Kickstarter project you can get yourself a CineSkate when it begins production (the retail price will be $200 at launch). With a pledge of $275 you will be able to get the CineSkate plus the tripod and ball-head (retail price of $350).