It’s one thing to be aware of deals via Fab.com, Groupon or the many other daily savings sites, but it’s another thing to be entertained with deals based on your buying behaviors. Bync, is a free service that delivers highly relevant deals and coupons by syncing to your bank and credit cards to determine where you shop the most. 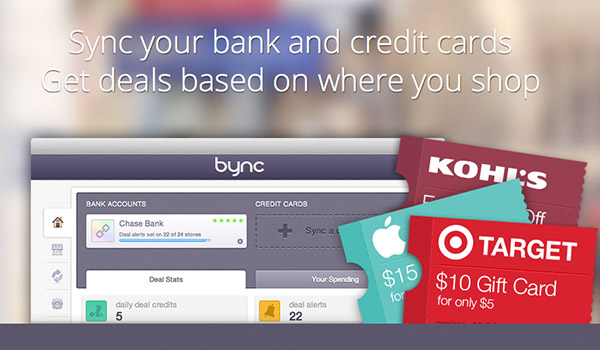 Founded by Ryan Bales from Boulder, Colorado, the idea came about after being frustrated with receiving numerous daily deals from sites like the one’s mentioned above that had nothing to do with his interests. Simply sync your bank and credit cards to Bync, it then discovers where you like to shop, and you get alerts when your stores have deals.

With the ability to sync to over 10,000 different banks and credit cards, Bync is able to get a clear picture of your overall spending and provide you with deals and coupons that you’ll actually use.