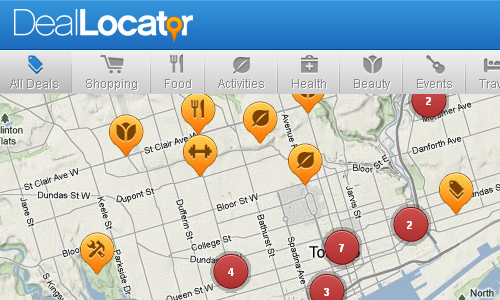 DealLocator is a location-based group-buy and coupon finding app that aggregates content from the countless deal sites from around the world into the most intuitive user interface we’ve seen. By leveraging existing technologies like Google Maps, and content from international deal sites, Playground-Digital in Toronto has managed to build this robust application for users to navigate the cluttered group-buying space.

With the emergence of Groupon and the thousands of deal sites sprouting almost daily from around the globe, navigating the landscape has become increasingly cumbersome. DealLocator gives you a birds-eye-view of what deals are available in your neighborhood. What’s more—DealLocator offers travelers a fantastic way to find deals at their vacation destinations quickly and easily. Best of all, by integrating Google’s Map API, a quick drag-and-drop of the orange figure offers an at-a-glance street view so users can have an idea of each business’ general atmosphere, and area. This gives you the peace of mind to know that the business you’ll be visiting will be in an environment and neighborhood that you will feel comfortable in. 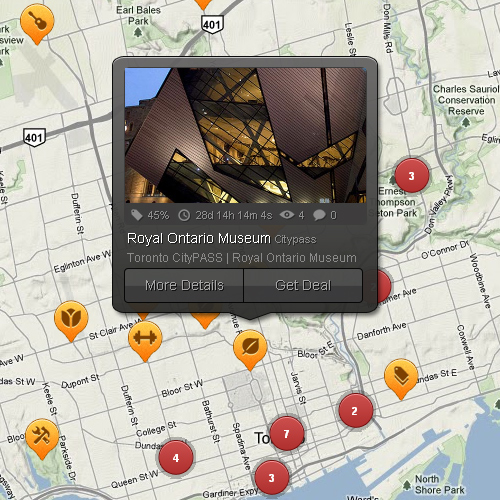 As impressive as the front end of the website is, what the end user sees barely scratches the surface of the technology that allows the UX/UI to be as intuitive that it is. Available in both web and mobile (mobile to launch May 30th, 2011), DealLocator remembers where you last searched, and reloads in the same area the next time it’s launched. What’s more, the folks at Playground Digital have organized the deals it compiles into general categories of interest. That means, with a few clicks to activate just the “Health” and “Beauty” categories, your hope of finding an awesome deal on Moroccan Bath Salts will be that much more streamlined.

Find your area. Choose the categories that interest you or see all the deals. Click on a deal for a quick view. Click again to see all the details and reviews. Commit to buy, or return to the map. It’s just that simple. DealLocator’s commitment to aggregating every deal from every deal site means you can now come to one place; it’s all in their mission: 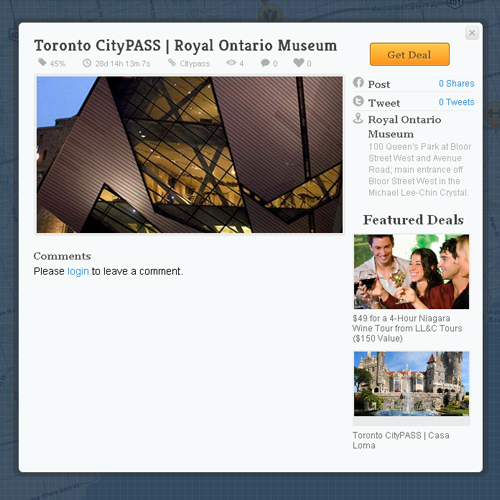 Extending their mission further, DealLocator has added an interactive and social component beyond group buying, to include a hope, “[t]hat if you find a good deal, you’ll share it on deallocator.com so that everyone can benefit. People get great deals and local businesses get more business. We make it easy (and free!) for anyone to post, rate, and discover great deals.”

The experience offered by DealLocator runs in parallel with the culture of the company and the people who created it. Playground Digital is a fun and forward-thinking digital agency in Toronto, which has evolved into a company with a focus, and deep passion in assisting the startup scene in Toronto. Be on the lookout for Playground’s next leap. They’re scaling up, and excited to begin a more engaged startup culture which includes advisory services, incubation, and overall mentoring from seed to series A and beyond! In the meantime, scoop up a deal on DealLocator—well… what are you waiting for?