If you frequently use public transit systems you’ll understand the pain of waiting at a bus stop counting down minutes, when you could have been doing something more useful. Especially during these cold months, being outside is the last thing anyone wants to do. Luckily in Toronto apps like the Rocket Man app exist, although not the most well designed piece of usefulness, it does still work. But apparently the problem of waiting for streetcars and busses can also plague those in warmer climates. 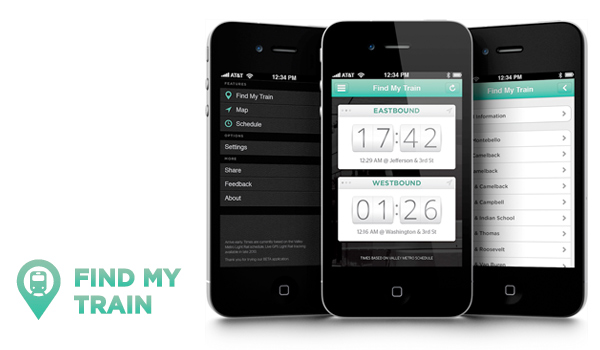 Founded by the foursome of Adam Mann, Al Wold, Brett Farmiloe, and Michael Witham, Find My Train is an iPhone app for the Phoenix Light Rail that will let you know when your train is scheduled to arrive with just one tap. Aimed to be the most simple transportation app design ever created the project came to be after Adam Mann pitched his idea this past October during Startup Weekend Phoenix.

Having hated waiting for the Light Rail, and even getting to the stop a second too late just to watch the train speed away on many occasions, his idea was voted to the top 10 of the 51 ideas pitched during Startup Weekend. After designing a prototype by Sunday evening, Find My Train won second prize.

Ideas that help everyone with small annoyances like waiting for a train is a great concept, but we see another opportunity popping up as well. What if you’re an avid traveller going from Toronto, to New York, to Phoenix, and everywhere else across the globe, doesn’t that call for a different app for each destination? Google maps does a great job at aggregating a lot of the information, but an opportunity for a global geo-location train and bus tracking system should be on its way one day.

Find My Train can be downloaded by clicking here.