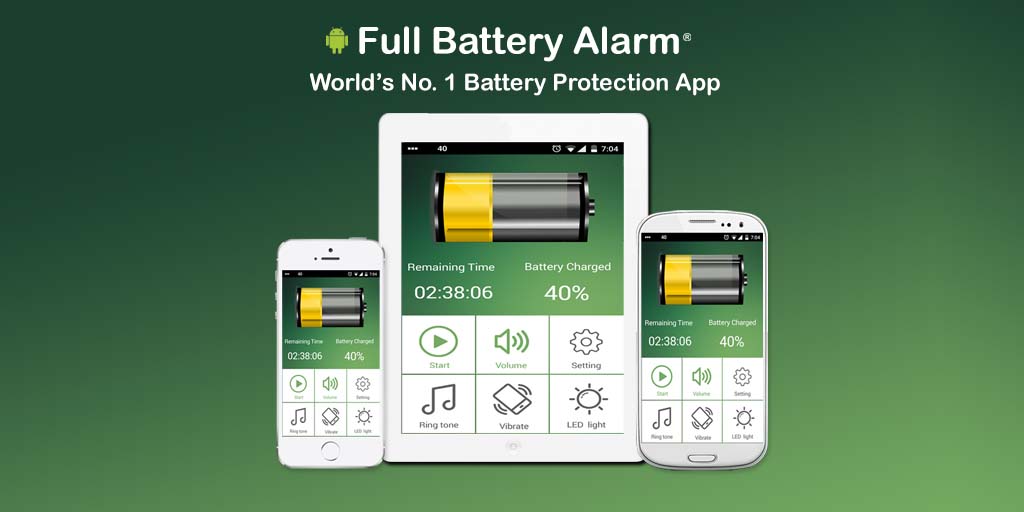 Full Battery Alarm™ prevents your mobile phone battery from being overcharged. In today’s busy schedule it is very hard to check the battery status again and again. Full battery alarm™ is an unique app which notifies the mobile phone user when their mobile phone’s battery is fully charged.

Full Battery Alarm™ has three different type of notification settings. You can select your favorite ringtone or can choose vibration or light blink alert if you are in a meeting. Install the app on your mobile phone and launch the application. It will automatically sound an alert once the battery will be fully charged.

The uniqueness of the app is in the fact that the user need not open the app every time he/she wants the receive full battery notification. Once the app is installed in the phone, it will run in the background and will automatically notify users. It also has vibration alert and LED blink alert so that people can charge their phone while attending seminars and long meetings without disturbing others.

The app has been launched in two languages i.e. English and Hindi and also provides support on language addition on request. The user doesn’t even have to open the app to stop the notification when the app sounds the alarm. The notification can be stopped by unplugging the charger cable from the phone and also can be stopped by dismissing the alarm from the main screen of phone.