If you’ve been screaming at the theatres this Halloween, creepily enjoying Paranormal Activity 4 or went to watch Hotel Transylvania with your little one’s you probably shared your thoughts, likes, and dislikes on Twitter or Facebook. But did your friends seem to care? Maybe you’ll need to find some new cinema loving friends or do you really just need a social network that caters specifically to your love of movies with other like-minded movie fanatics? 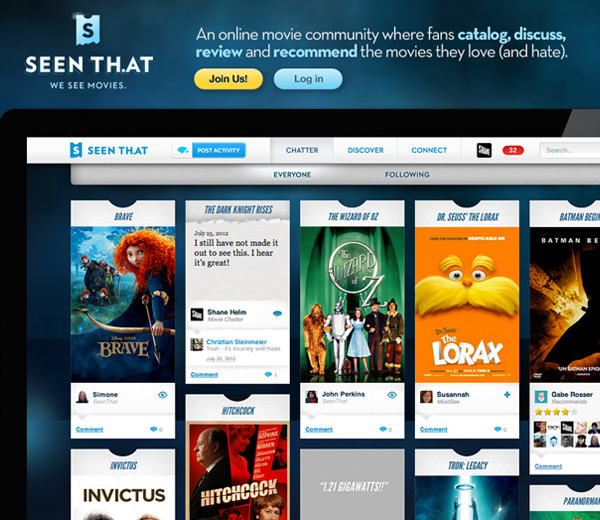 There are a few great sites that help you connect with other film fans around the world such as Letterboxd or Wigglehop, but the one that seems to be generating the most buzz while still in beta is SeenTh.at – An online community where users discuss, recommend and discover movies, as well as organize lists of what they’ve seen or want to see. What differentiates SeenTh.at from the others is its design, community and ability to identify whom to share a recommendation with. While most of the competitors in the space provide the opportunity to mark movies watched, organize, comment and rate; SeenTh.at let’s you specifically target groups or a single user and recommend to them what they should watch.

With a Pinterest inspired interface you can quickly share your passion, discover new films, organize your viewing history, and connect with others that love movies as much as you. Founded by John Perkins, Thanh Nguyen and Shane Helm the dynamic trio compliment each other as a hustler, developer and designer respectively. Co-founder John Perkins tells us:

SeenTh.at is an online movie community where fans catalog, discuss, review and recommend the movies they love (and hate). We’re ‘Goodreads for movies.’ Our vision is to delight movie fans by using the latest technology as a means to create a more fulfilling and seamless movie experience. 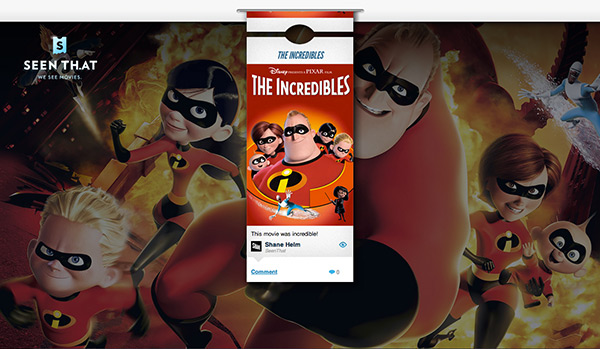 The well-designed social network takes a strong visual approach to the movie discovery experience. With large background splash images, well thought out user interface elements and a focus on making a social network that is clear and easy to understand. For instance in the platform’s “Chatter” section movies are clearly marked in blue for positive reviews, purple for negative reviews, and yellow for reviews filled with spoilers. It’s clear a lot of attention has gone into the design of the application and the experience is very much visionary on how the standard for new application design should be defined. Many startup teams begin with a developer and the business development side of things, but John tells us:

“We felt from the beginning that our design was going to be something that would set us apart from the rest, which is why Shane has been such an important part of our small founding team.

Consider our audience. We’re building a site for movie fans. Movies are visceral, visual and emotive. There’s a certain aura around ‘going to the movies,’ and we did our best to try and capture that sense of excitement and wonder. This was probably the biggest influence on how we’ve approached the site’s design, because we want to extend that movie experience as much as possible. And you can be sure that everything we do moving forward will carry that same goal of creating a more fulfilling and seamless movie-going experience for fans.” 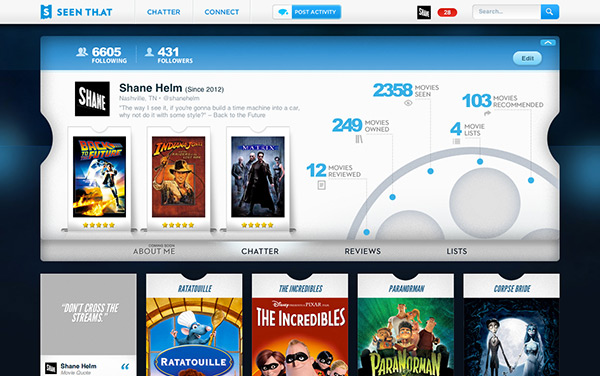 John also tells us that SeenTh.at is still very early on, but has loads of updates coming in the next few months with a focus on mobile with the desktop application already at minimum viable product. If you love movies you’re going to love using SeenTh.at, while using the platform it felt at times we were already at the movies reading trailers while skipping the ones that have Jennifer Lopez in a romantic comedy (no offense to Jennifer Lopez fans) – maybe a comment best served on SeenTh.at.