We’ve shared and discussed the importance of swag on various posts throughout the past twelve months. And even more apparent is the need of branded materials that are unique which can build a lasting essence of curiosity to learn more about your business. 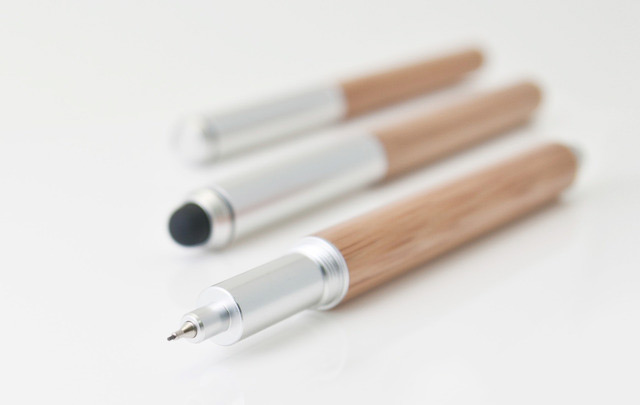 We were discussing that specific idea with Trevor Ducharme of Daniels Carbon when his organization led sponsorship of the recent Action Partners event at MaRS in Toronto. Daniels Carbon brought with them bamboo framed pens that doubled as a stylus, and although the swag wasn’t something we haven’t seen before it was a new for the event attendees. The pens didn’t look like a stylus as well, but as an eco-friendly company the bamboo design of the product with their branding seemingly etched on it added to the novelty building a stronger brand connection and a giveaway that event goers will be able to use afterward.

At first attendees scoffed and didn’t pick up the stylus pen because they thought it was like any other pen. The design didn’t’ make it apparent that the stylus stub was attached to the bottom of each pen. But when they found out about its dual usage, Trevor told us the assembly around their booth was astounding. In what seemed like trucks of people, attendees came around to learn more about Daniels Carbon and pick up their own bamboo stylus pen to take home. Trevor also mentioned that he saw some attendees so in love with the branded giveaway that they had three to four of them in their shirt pockets.

Daniels Carbon could have used any type of custom branded giveaways or other promotional items, such as t-shirts, buttons or stickers, but none of them would of left the lasting impression that the bamboo stylus pens did. Because they were connected to the eco-friendly theme, had a usable purpose missing in people’s lives and the connection to their brand the strategy behind the swag they chose to give away was impactful. So much so that now the majority of the attendees are using the branded giveaway regularly and being exposed to the Daniels Carbon brand everyday.

Swag is important for startups, but being more strategic in how the swag connects to your brand is even more important. The story that can be told with your custom branded giveaways will effortlessly help push brand awareness by using the swag as a gateway to build the emotional connection to your customers that will be desired. When you’re deciding on what swag to giveaway try to think about how it can be used everyday by possible consumers and does the swag help support branding in an effective way.