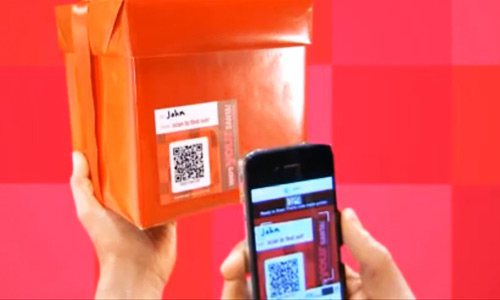 Who’s Your Santa! That’s the pitch from JC Penny’s new Christmas campaign being delivered by creative agency Saatchi & Saatchi. The Christmas push, as is for all retailers, is an important one – especially during uncertain economic times, and JC Penny is taking a hard initiative to incorporate traditional media with social marketing and interesting technologies to gain the sales edge.

We’ve seen QR codes being used in various forms, such as directing people to a website and holding business card information, but JC Penny is doing something very inventive to tie into their Christmas Campaign: Gift purchasers will be able to personally record a personal message to their present. Buyers will receive what is being called a “Santa Tag” when visiting a Penny store, which is a QR code that can be scanned in order to record a message. The Santa Tag is then affixed to present. Recipients will then be able to follow suit and scan the QR code themselves, via their smartphone, and hear the message. A real personal and fun touch to gift giving from JC Penny.

This new offering and inventive idea for QR codes should help JC Penny have a marketing edge on its rivals. You can also check out their Christmas Facebook game on their Fan Page on November 18th.