Attempting to recreate the success of Hulu is an auspicious task, but that’s exactly what Detroit-based Glocal is trying to do. However, this startup has a more local focus for news and entertainment; all while providing greater economic impact for publishers. Videos don’t have to be what we find on Facebook and Twitter, while their successes don’t always have to be measured by its viral factor, there’s a place for every type of video, and Glocal hopes to jump on that with a local approach. 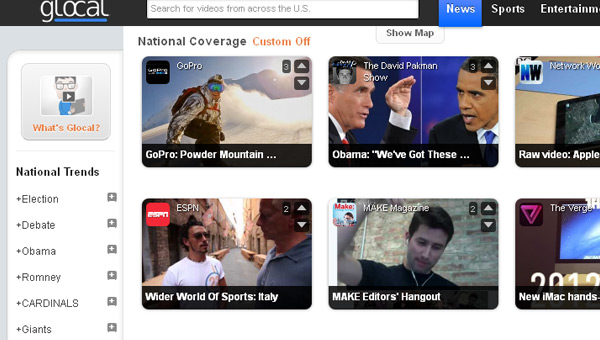 For Glocal, trying to be local video to the level of what Hulu is for TV shows is a giant leap that started with a first step by coming out of beta on Wednesday. The platform is hoping it will be adopted by local TV stations, journalists, citizens, newspapers and all other video publishers whom will jump on the Glocal soapbox to shout-via-video in their home towns.

Upon first viewing the site, users are able to find their town and create their “My/glocal” feed. Categories include: sports, entertainment, news, politics, lifestyle, tech and business within 60 American cities with over 1900 providers. Most of the videos currently are sourced from YouTube, but overtime Glocal hopes that it turns into a place where publishers will upload their content directly.

Would you consider using Glocal, do they fare a chance to compete with YouTube or Hulu? The site will give local publishers greater visibility in an otherwise saturated YouTube platform for discovery. Hopefully Glocal also introduces better ad network compensation packages for video producers to entice the switch.