This past March we shared with you Seriously Mobile, a community for mobile designers, which is being built with an emphasis on feedback and interaction rather than just a showcase of design. Since then the platform has re-branded, redesigned and grown rapidly with hundreds of crowdsourced designs for your inspiration.

Now named Meerli, the Swedish founders Alexander Auld and Holger Sindbaek have developed an Pinterest inspired minimalistic forum to share iPhone, iPad, Android, WP and icon designs. Users can also “upvote” other peoples designs, give feedback on them, favorite them to save for later or just browse for inspiration. 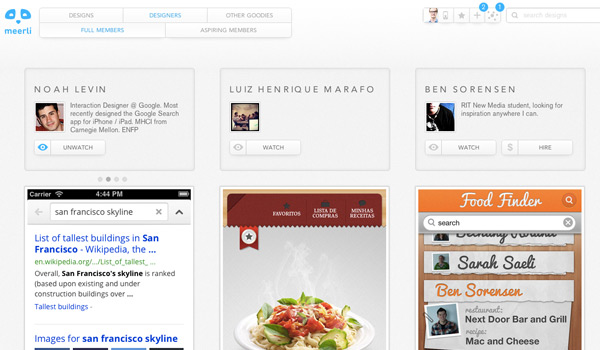 Since launching out of private beta, Meerli has been discovered by over 2000 designers and over 600 designs have been shared – steady growth for a very competitive segment with the likes of Scoutzie, Dribbble and Behance to name a few. But since we last connected with Alex and Holger we were curious, why the re-brand, what have they learned and why should a designer share on Meerli? Here’s what they had to say:

“Yes, well I guess things do look a bit different on meer.li these days. The name was always on the cards to be changed, we encouraged our early members to come up with suggestions for the community. We even had an open discussion on Facebook where people posted all kinds of cool name ideas. After a few weeks meerkats popped up on the table. They are interesting animals with an extreme sense of community and they like to stand out. So we went with meer.li.”

“So far we have learnt a lot from the changes although the concept is the same. We have built this community for mobile designers and enthusiasts and made it great by encouraging ideas and feedback from the Meer.li community. If you have been visiting meer.li on a regular basis you might notice changes happening all the time. This isn’t to say that we have a ship, ship, ship mentality. We just encourage and receive a lot of feedback from engaged members who want to contribute to making the best experience possible, and we act on it.”

“The mobile community is definitely growing, and we feel that it is only natural for mobile designers to have their own garden where they can show off their designs, build a network with other talented designers, get feedback and in the end get work. We also feel that the minimalistic clean design of meer.li helps to keep the focus on the designers work and not letting the work get lost amongst strong colors and complicated interaction.”