I had the misfortune of being in Japan on March 11th, when a massive 9.0-magnitude earthquake shook the nation. After the earthquake, incredibly catastrophic results occurred; tsunami waves decimated the northeastern coast of Japan leaving millions in damages and numerous others homeless or injured. I did not stay in Japan for much longer, based on the fears of family back in Toronto, but the short time I had in Japan was truly magical. The people, despite the horrific results of the natural disaster, remained strong and optimistic leaving me inspired. Thus, it’s an absolute honor to share with you an incredible idea, a place to share your messages with the rest of Japan: Messages for Japan. 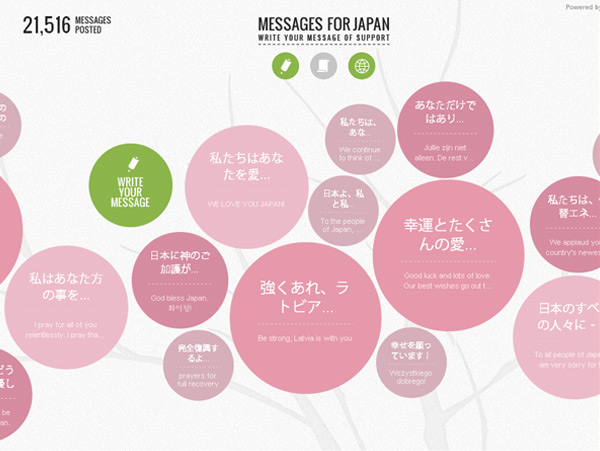 Messages for Japan is a way for anyone around the world to deliver their messages of hope and support for the people of Japan. You can write your own message in a native tongue and Google Translate will publish your words into Japanese. Messages then can be read and you can view how our entire world is praying for those affected by the disaster. Donations can also be made through the site through one of the many charitable organizations looking to help those in need.

Using the Google Translate API, this site automatically translates text from one language to another by looking for patterns in hundreds of millions of documents — a process called “statistical machine translation.” By detecting patterns in documents that have already been translated by human translators, Google Translate can make intelligent guesses as to what an appropriate translation should be.

Please do donate using the form on the bottom of the write your message page to help the relief efforts and send your message as well. Japan is a nation that is beautiful, inspiring and strong and we @newstartupideas pray for the people of Japan everyday.