Launching in September, Mixr is a mobile social app – coined as a “mobile party” – platform for college students. You might ask: what is a “mobile party”, according to the team at Mixr: “A mobile party is pretty much the same as a real party: you socialize with the people around you and have a good time.” Using this new social party platform college students will be able to post a location feed or chat with other students privately whom are around them without having to “check-in”.

College for many students is an opportunity for socialization, and we’ve seen how successful Facebook became by starting out with that exact same user group. Young, late teens and early twenty students are some of our most social and tech savvy people around, but according to Vincent Sanchez-Gomez, one of the Founders of MIxr, “yet they spend much of their day in places where social interaction is practically nonexistent, like a classroom or library. That’s a serious mismatch that Mixr plans to solve. College lectures have been terribly disrupted by the introduction of distracting sites like Facebook. We hope to disrupt them even more.”

The Mixr was built by 4 UPenn students: Vincent Sanchez-Gomez, Fred Wang, Jenn Liu and Willy Huang. Vincent Sanchez-Gomez and Fred Wang were both on the winning team of the Penn Apps Mobile Hackathon in 2011, where they realized the potential of a hyperlocal social application in the mobile space, after-which Jenn Liu and Willy Huang rounded out the team to bring us the Mixr application. 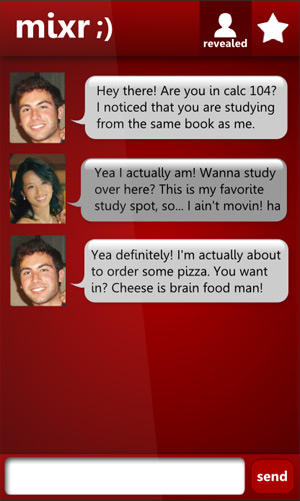 Mixr opens the door for students to socialize and communicate in times where the options on how to get a message out were limited. For instance, imagine you were studying and got bored, needed a break and wanted to communicate something in the library. Your typical outlets would be on Twitter or Facebook to share a message. With Mixr, you can now post a message on a geo-location based feed (so only those in your close vicinity) would be able to see what you had to say. Or you might want to tell everyone something at a super loud party; Mixr will let you socialize and share your thoughts / message with only those in the same room. “The common theme is that Mixr helps college students socialize in a new way at places where it was previously impossible.”

Q & A with the Mixr Team

What made your team want to create Mixr?
We couldn’t believe how hard it was for people to interact digitally with people around them. Two of us were previously working with a startup specializing in bar flirting through sms, and from that experience, we realized the huge potential of hyperlocal communication. Many things a person wants to share are only relevant to the people around them, and at the same time, completely irrelevant to the entire web. It’s very often that I see a friend’s Facebook post that makes absolutely no sense to me because it is describing something that’s happening at a crazy party that I didn’t attend. But how can I blame that person for posting? They have no other means for broadcasting their funny thoughts or anecdotes to other people at the party. As for broadcasting their thoughts to people at the party (who they’re not connected to on the web), there is no means whatsoever, unless they have a super-powered loudspeaker.

Additionally, we saw room for improvement in the “study distractions” space. Right now, if someone is bored in class or at the library, the go-to distraction is Facebook, but that completely dumps all the potential of their location in the toilet. They are sitting in a room full of good looking college students in the same position as them and they have to resort to Facebook as a distraction? That’s sad…

How do you see Mixr evolving over the next few years?
There’s been a huge boom in the hyperlocal market in the past few months. We want Mixr on college campuses because we think it’s the place where people will get the most use out of it. Over the next few years we hope to become the must-have smartphone app for college kids. We want grads to wish they were still in college. We want high school students to get excited for college because that’s where they get to use Mixr.

Any final words for someone starting a new business?
Don’t be afraid to fail. You probably get that a lot. But we mean it. Too many people don’t pursue something they have because they’re afraid it’ll be too hard to make it succeed, or they don’t feel they have the manpower to do it. If you have an idea that you believe in, go balls-to-the-wall and beat it till it’s dead, and this is especially true for college students who have little to lose. Why are some guys just so much smoother at approaching girls? It’s because they’re not afraid of rejection and they’re willing to just go in. It’s the same way with startups. Some will succeed and some won’t, but having the confidence to really put your heart out into your ideas, we feel, will greatly increase your chances.