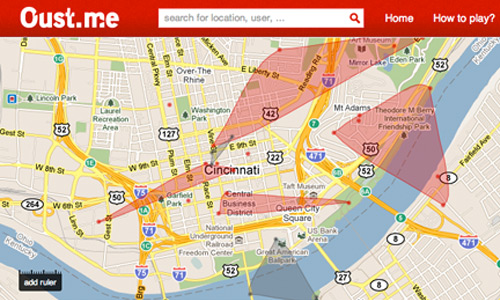 Most of the New-Startups.com staff grew up playing Risk – the strategic game of choice when trying to attain global domination, – then we grew older, the dust started to fall on the Risk figurines and smartphone’s became our new tools for gaming. Today, we use Foursquare, Gowalla and Facebook Places to tell people what we are doing and where we are, and possibly become “mayor” of our favorite locations. But the territory/mayoral capturing stops right there. With Oust.me we can now relive some of our Risk-loving younger years and experience a game that is a real-world strategic geolocation gaming platform.

It’s fun to try and overtake someone as mayor at various Foursquare venues, but there is no connection between near by venues in order for you to become president of an entire block or territory. The Oust.me game allows you to initiate the territory building process instead of just collecting locations. The idea was born in the 2011 and in mid-April 2011 the Private Beta was launched. Within two months of their private beta phase, Oust.me had gained 1950 users – after which their users provided concerns of the platform, which were promptly listened to and the game is now becoming a more easy to use application where territories are converted in real-time.

According to Damjan Jagar Oust.me is a complex strategic game and is not as easy as it seems at first glance. “Three points (or more) which form the basis for a single territory, cannot be apart by more than two kilometers and in addition the user must be an Ouster at these three points – which is being calculated with a special algorithm, which overlooks the number of check-ins over the time.

But there is another peculiarity in the formation of the territory – between these three points may not be the point where someone else is Ouster – this means that the game is becoming strategic and users must plan what points should be Ousted to increase their territories. “

Oust.me gives users the opportunity to use their check-ins to make as many territories as they can and compete with friends, no matter what geolocation check-in service they use. We had a ton of fun playing the game, and we think you will too! It feels like we are all kids again competing to own Australia and then move out to attain global domination (a Risk reference, just in case that made no sense), but now in a real-world local atmosphere.

According to Oust.me, they have a clear mission as they grow – “to become the geolocation platform, allowing users to self create own games within Oust.me and to provide them with challenges which will give them additional points and to offer customers a real game experience in a virtual world, which is a reflection of their actions in the real world.”

What do you think? Would you want to play Oust.me? Would you try to change where you visit and check-in to expand the territory you cover?