In the culinary world ‘mise en place’ and ‘mise en scène’ in the filmmaking world both evoke a respect for having ‘everything in its right place,’ whether it’s for making a meal or for setting the stage of a scene. But for young entrepreneurs Jenny Chan, Alvin Campana, Raymond Joo, and Benny Cha Cha Chan; ‘Mise’, as a culinary experience, is defined by a unique, carefully considered approach to pairing these two worlds; presenting each element to excite each guest’s taste buds and inspire imaginations. 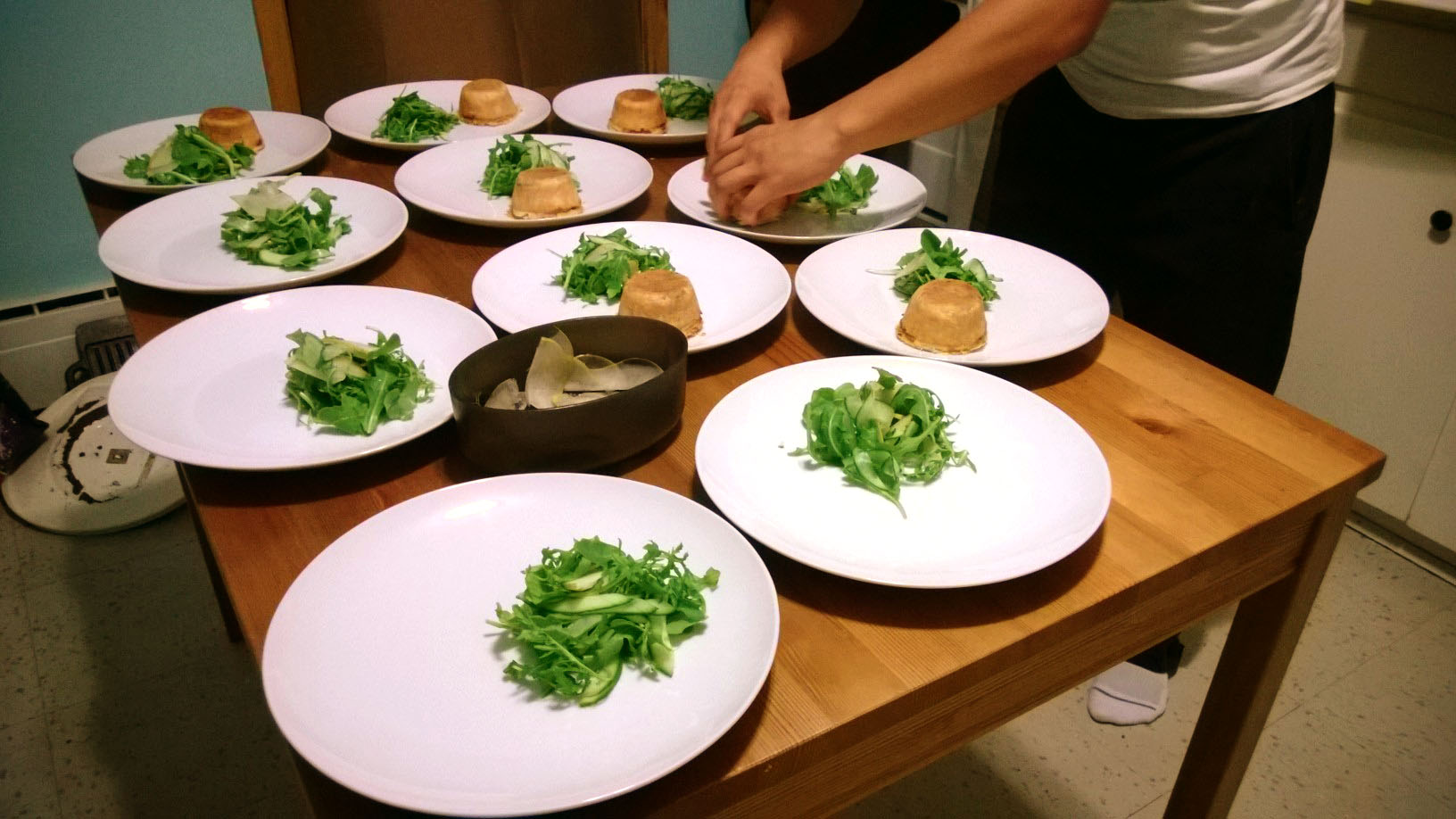 Last week were delightfully invited to share in the second pilot run of Mise in a friendly suburb of Toronto. We had an idea of how the night would transpire: with a movie and a meal of course, but we had no clue the culinary adventure that was about to leave us wanting so much more. The four course meal was paired with the 1996 entrepreneurial escapades of two failing restaurateurs in the Big Night. The Stanley Tucci film with appearances by an unexpectedly skinny Marc Anthony shares the story of two Italian brothers taking a startup gamble to save their business. 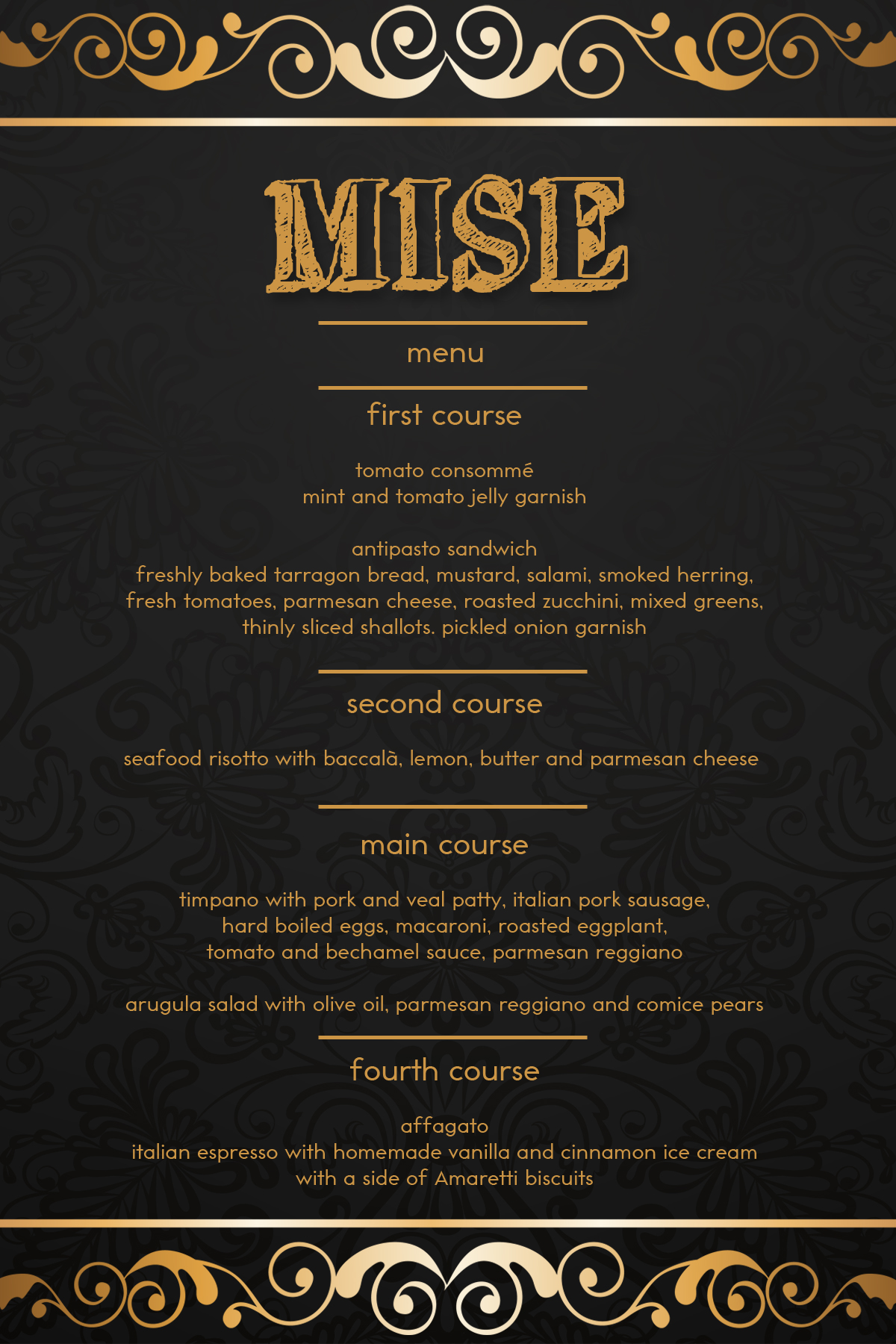 The meal created by Chef Jenny Chan is inspired by the script and events that take place in the film. As the film opened we began this five-star-mouth-watering journey together with strangers watching then essentially inhaling a Tomato Consommé with an Antipasto Sandwich; while the film twisted and turned and the chef brothers in the film discussed what builds a beautiful risotto, Alvin Campana set forth a Seafood Risotto that tasted like the love and passion of actor Tony Shalhoub as he shared his love for pasta in the film; The main course brought a Timpano with pork and veal patty while a fresh Arugula Salad shared the plate; As the credits rolled the night ended as we sipped on Italian Espresso with Vanilla and Cinnamon Ice Cream along with a Amaretti biscuit.

More than dinner and a movie, Mise was the best meal one could of imagined with friends and strangers sharing in a movement we all could see happening blossoming with this startup. After the meal we had a chance to ask Jenny where this idea came about:

“During the last few weeks of my culinary program at George brown, I wanted to watch a chick flick to get my mind off of the looming exams. It was movie called Simply Irresistible – In this film, the main character made these caramel éclairs that drove people insane. I immediately started to do some research to see if anyone has attempted to make those éclairs. I didn’t really find anything except for traditional éclairs. So I started to play with the idea of making 3 or 4 dishes from the film including the éclairs and inviting my friends over for a movie night. I began thinking that this could be a really interesting event and I love the idea of underground mysterious dining events. After discussing it with some loved ones, I decided to take the jump and try it out.”

For Jenny being able to cook means the opportunity to provide instant creative freedom and gratification; the ability of which comes inspired by her chef father. When she was younger Jenny’s father owned a coffee shop, and she along with her sisters would help him cook and bake every night. Those moments together help mold the creative genius that now lets Jenny have to ability to think of something totally out the box, execute it and have a delicious finished product right away—it’s her contribution to art. But the art that one “feels” the moment they walk into a ‘Mise’ wouldn’t be possible without a team in addition to Jenny:

Alvin Campana organizes the aesthetic at Mise Events; he is the audio-visual representative, host and main server. Alvin Campaña is a Toronto-based writer, director, editor and visual effects artist. Devoting his life to art in its many methods, Alvin continues to look for new forms of expression. Alvin has the expertise and talent to create the perfect Mise en scene for every guest. 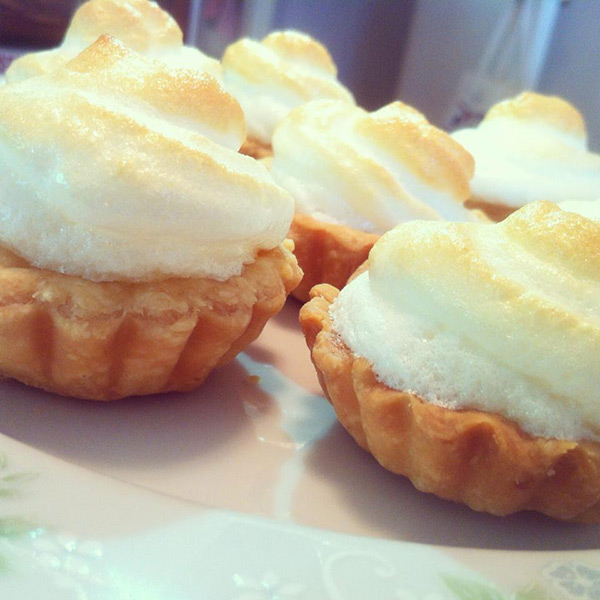 Raymond Joo grew up in a traditional Korean household and watched his mother make amazing food in his home. His fascination with food inspired him to pursue this as a career. Currently working at Spice Route, he had 6 years of cooking experience behind him, before going to George Brown College for the culinary skills program. His passion for cooking, quick hands and eye for perfection keeps everyone motivated in a hot kitchen. He was trained in classical French cuisine and also specializes in Japanese cuisine.

Benny Cha Cha Chan grew up in Hawaii and worked as an investment banker for 15 years. He has always wanted to work in a kitchen but his career in finance eliminated any plans for the potential to go to culinary school. It was a luxury he couldn’t find the time for. After being burnt out, he moved to Toronto and took a year sabbatical. He decided to enroll himself at George Brown College and is now trained in classical French cuisine. He is currently working at The Chase restaurant. His enthusiasm, sense of humor and stories about his world travels is what keeps the great mood in a busy kitchen with slotted spoons flying around. Benny’s dedication to great cuisine is what he strives for everyday and is represented in his work.

The hope is for Mise to become a new way of experiencing food and film, a brand that encourages a unique dining experience. So far the team has only launched two events, in the beginning Jenny and Alvin thought they could handle it all themselves, and even though it was a big success it still had flaws from which they learned that help was needed to bring dishes to life while the film was playing. The second Mise with Ray and Benny by Jenny’s side in the kitchen made for an easier flow in preparation and execution. If you’re a master chef and planning to do your own Mise in your city we highly suggest connecting with Jenny and the Mise team first, she also told us:

“If someone was to do a Mise event in their home town, the most important advice is to have a great team that is reliable, enthusiastic and motivated, which I am lucky to have. Having people in a team that has different strengths is a necessity because it creates a great base for brainstorming and exercising our creativity. Creating the proper atmosphere is also extremely important. While Mise events take place in the comfort of people’s homes, taking the time to transform that environment, even with the slightest details, heightens the guest’s experience.”

If you’re in Toronto and want to have a Mise of your own, you can reach out and share the movie you wish a meal can be prepared with on their Facebook group. And Jenny will build the meal of a lifetime for you to enjoy. It’s exciting for us to see a small passionate set of creative entrepreneurs building a movement with their passion—It’s an event that isn’t just a dinner and a movie, Mise is a culinary experience for the senses from artists that love what they do creating an environment that you’ll never want to ever leave.