Over the past few weeks the water cooler talk at our New-Startups.com offices has been about the hit A&E show Barter Kings: A show that follows two traders move up the trading cycle to attain prestigious items. For instance they may start with a simple iPod Touch and after 6 trades end up with incredibly with a diamond ring. Barter Kings is truly an inventive show that shows the power of negotiation, the state of the American economy and how much fun trading can be. 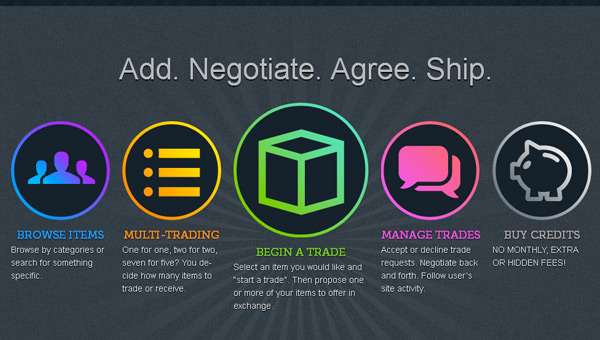 Tradeomics is cut from a similar cloth and hopes to make bartering an easier process by perfecting the social science of trade. Take for instance those video games you are no longer playing – you can trade them for that iPhone you’ve been wanting. Tradeomics lets you request one or more items from various categories and you offer something you have in exchange to hopefully get what you really want. Categories such as video games, sporting goods, clothing, DVD’s, books, computers, and more exist currently on the site, while current items people are looking to trade include: iPhone’s, iPad’s, shoes, Acer laptops and various PS3 / Xbox games.

Founded by Nick Brewer and Trey Connell, the startup asks you to stop using Craigslist for bartering, instead opens an easier digitally social way to trade items. After a trade is made, users are guided to rate and review the trading parties to help grow reputations and credibility. Instead of trading for a stranger the site promotes the ability to have faith in the trading party through previous exchanges.

We still question if bartering is a trend or will be a true presence on the web, but after watching Barter Kings there’s one thing for sure: Trading can be a ton of fun plus getting rid of things you may no longer need so others can use it – what could be better.