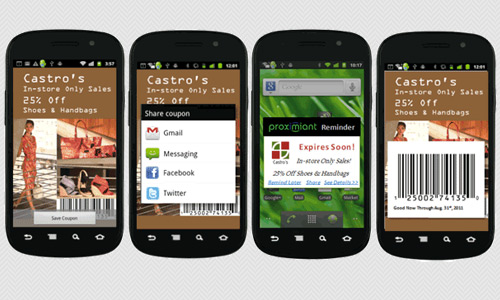 Going paperless is our current expectation for businesses, and services like Square are helping community store-fronts implement technologies that make the payment process quicker, easier and eco-friendly. Proximiant has just launched a new service that is similar to Square but uses NFC technology. The service will allow consumers to receive a digital receipt of their purchase that is beamed directly to compliant smartphone’s without having to give personal information to the seller. Proximiant provides a free low-cost hardware platform that uses NFC (near field communication) to pass a receipt from a register to new mobile phones.

We know, not all phones are NFC ready, such as the iPhone, but Proximiant has an answer for that as well. Retailers will be able to provide a NFC tag to consumers for free which can then be paired with their mobile phones in order to tap and send receipts to their mobile device.

The system works like this (or watch the video above to see how it works): Merchant’s would plug the Proximiant transceiver into their PC via USB, and upon a purchase the device passes the receipt with a secure connection to the purchaser’s phone after tapping an image to accept the receipt. A barcode is saved to the consumer’s phone, which is then scannable by the merchant in case future customer service requirements exist (such as returns or refunds).

For retailers, the transceiver does not connect into a POS system, which will make implementation into anyone’s current system easy. And as a simple plug-and-play platform, Proximiant has made it simple for even the most un-tech-savvy merchant to utilize the service. Retailers are charged on a pay-by-sales model, with the hardware coming for free, and receipts can be accompanied with marketing initiatives to help increase consumer loyalty.

Proximiant’s service is a very interesting idea, but to see how the operation can implement peripheral-less workflow’s for non-NFC based phone’s will be even more interesting. With Square well on its way to becoming the mobile-ecommerce platform of choice, Proximiant has a good idea and uses current technology to make consumer purchases paperless. Now, hopefully a non-key solution can be found for non-NFC based phones in the future.