In other terms, ‘hype’ is a concept that equates to a high level of anticipation. It is something that is invisible, but not only does it exist, it has become a driver of consumer behavior in today’s world. In a product’s pre-release stage, it is something that is quantified by outdated and unreliable means, and by traditional outlets such as surveys and clustered compilations of chatter from social media. Hypejar aims to funnel the ‘hype’, capture it in a single container to quantify, and to then present it to the world. A website dedicated to sharing details on all products that the mainstream wants to be aware of, but is yet-to-be-released and presenting it in one place. 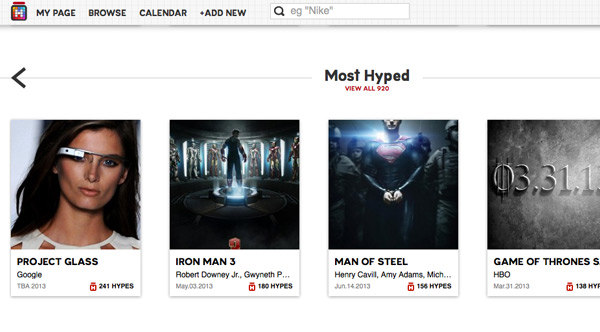 The Montreal-based company launched their beta site back in September with a very simple idea – organize all the products that are about to be released and make it more easy-to-find instead of scouring multiple sources. A sneak peak if you will, at the future of consumer products. Co-founder Grant Yim says:

“Before Hypejar, there was absolutely no way to find in one place, information about future products and their release dates. If information did exist, they were scattered across the Internet and ‘Googling’ was the only means to discover them. The fundamental flaw in that is how can one search for something without knowing of its existence (or future existence)? Second thing it solves is that that while there are many sites devoted to post-release reviews of products, there are none that adequately reveals mass opinions before their releases.”

Striving to be the Wikipedia of upcoming products and a social network where we can see others’ anticipation levels for them is the task of the four Canadian’s. Users browse for products or search by various categories, date, or product names and/or attributes such as actor, manufacturer, artist, author, director, etc. On products’ pages, they can either hype products up or down based on their levels of anticipation. On the same page, they can leave comments and also add content such as information, pictures and videos. Any user can even add a new product with a future release date in its entirety onto the site, as Hypejar is a wiki.

Currently offered as a web app, the team is diligently working toward launching a mobile app as well, but in the mean time, check out the official promo video below.