Doodling is not a waste of time and those that doubt it’s impact can just turn to history to see what a simple drawing on an unexpected medium can take flight too. All you need is a cocktail napkin and a pen. That’s it, not a diatribe of applications or desktop software’s, rather the simplest tools to share the potential of a startup.

The Southwest Airlines story is one that speaks true to that exact fact. Rollin King, an entrepreneur from Texas had dinner with a lawyer in 1967. But this meeting was more than a chance to fill their stomach’s it was a chance for Rollin King to start a business idea that is a staple in the commercial airline industry today. He drew out a simple illustration on a near by napkin—San Antonio, Houston, and Dallas were donned and connected to form a triangle. He explained that the company would do at that time what was revolutionary, offer non-stop flights between these three popular destinations. 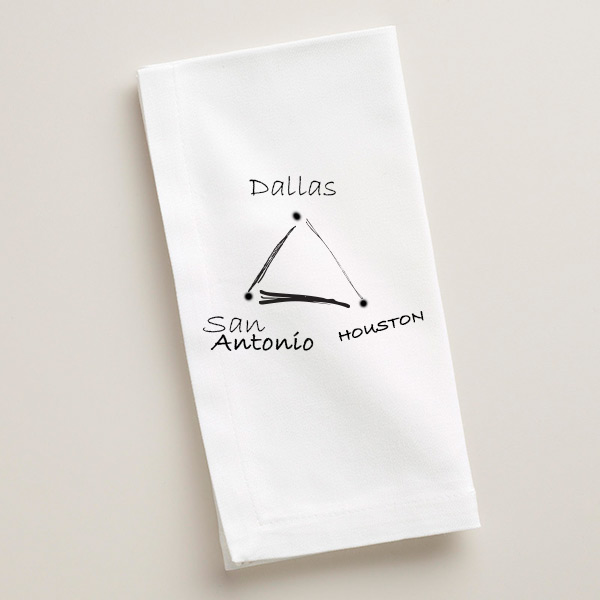 A simple napkin drawing built the opportunity for now Southwest chairman Herb Kelleher to start a tiny airline which blew up to be one of the most profitable airlines in the world. This is just one story of the million-dollar ideas that have come from a sketch on a napkin. Baum-Kuchen is celebrating the habit of creative entrepreneurs with a Napkin Sketchbook. Like Rollin King finding a place to jot down an idea instead of saving it today in an application is still a necessity. Because sharing an idea with a hand drawing always seems to be the fastest and easiest way to spark a solution.

When that does happen a paper napkin has been the medium chosen for years, it is the blank canvas that can be anything. From a logo, blueprints, a diagram, it works perfectly. Perfectly because it’s just a napkin and doodling on what feels like a non-essential product as opposed to a fresh notebook feels more freeing. Baum-Kuchen is selling their Napkin Sketchbook in a leather case for those exact reasons.

What was your favorite napkin startup story?