Although it originally aired in 1995, there is a scene in a classic X-Files episode titled “Clyde Bruckman’s Final Repose” that I remember to this day. My memory of the entire story is a bit hazy but I do recall that a great character actor named Peter Boyle portrayed “Clyde Bruckman”, an enigmatic but jocular psychic. In one of his darker moments Clyde asks one of the series’ protagonists, agent Fox Mulder, if he would like to know how he is going to die. The exchange goes as follows: 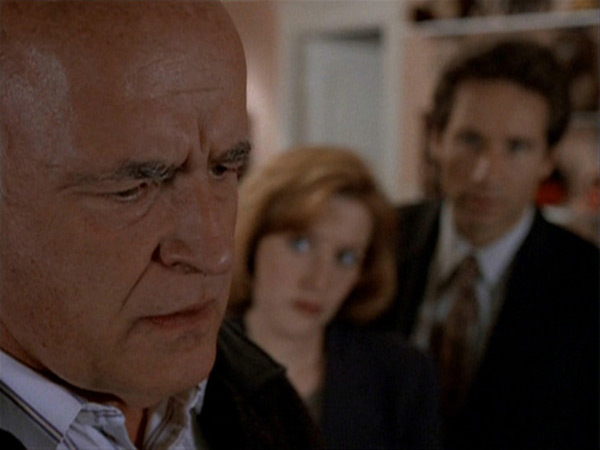 Mulder’s thoughtless challenge and Clyde’s merciful rejoinder illustrate an unquestionable truth: while a great many of us might “think” we would like to know how our lives will end, most of us really don’t. Knowledge of the precise circumstances of our ultimate fate would harness our focus and direct it obsessively towards that end. Because few things matter more to most human beings than their own lives this focus would be impossible to contain. It would move us at least a few blocks away from sanity and render us markedly less capable of rational thought.

Because the stakes aren’t quite so high, considering the circumstances and timeline of a new startup’s potential demise is less taxing. In fact, paying close attention to when and how a new venture could fall apart can be very beneficial. What I mean by “paying close attention” is really nailing down, based on your expenses, revenue, and cash on hand – how many days a startup has before it bites the dust.

I’m not the only who feels this knowledge would be beneficial. About two years ago Jason Cohen, founder of WP Engine & Smart Bear Software, conceptualized the idea of a “startup deathclock”. Richard Rodger coded it and thus www.startupdeathclock.com was born.

The way the deathclock works is pretty straight forward. You input your cash on hand, your per month expenses, and your per month revenue. The clock takes the data and calculates the exact amount of time, right down to the second, before your startup collapses. That’s all there is to it. Just a cold, hard, truth. 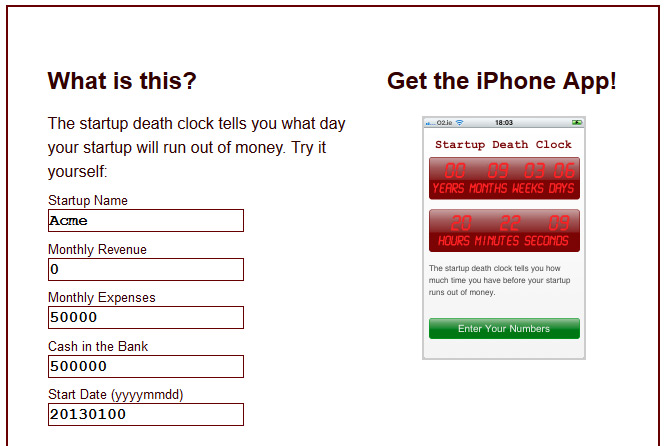 I recognize this is old news. And the website isn’t pretty. And although this isn’t a conventional new startup tool this was a great concept and is worth exposing for a few reasons. As Jason himself explained on his blog:

“Nothing drives correct thinking about getting to profitability like facing your own demise. No hedging, no estimating, no complex Profit & Loss projections, just a date.

Confronted by an ultimatum, your thoughts crystalize. Maybe some of those things on your to-do list for this week aren’t as important as you thought. Maybe you could get v1.0 out the door faster..”

Unlike agent Mulder confronting his own mortality you do want to know when your startup will die.You often hear entrepreneurs told to “know their numbers” before approaching potential investors. It’s undoubtedly important to know you margins, your cost of customer acquisition, and your break even point ect.. I would add that your estimated time of death is another metric that should be kept at the forefront of any startup founder’s mind and www.startupdeathclock.com can help you do just that..

Are you a freelance writer? We’d love to hear from you!