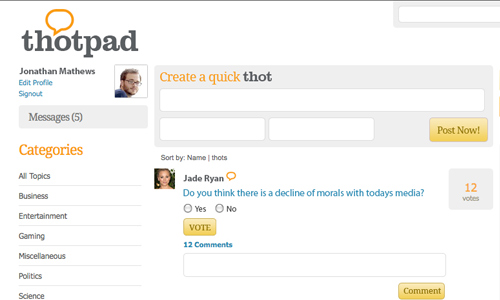 Thotpad is a micro blogging network based on votes. Its aim is to bring forth the collective conscience of the people and unite them. Designed as a social network to create and promote change, Thotpad reaches out to the crowd and puts everyone on their own soap box to lets it be known what their decision and “thot” is.

According to founder Vimal Tandan, “The government and politics has always been (supposedly?) controlled by the citizens through Votes. It’s the only means by which the general consensus of the mass is brought to the fore front. Whereas the backward (and always termed “rising”) countries, face too much corruption, including bogus voting. The voice of the common man is lost.

We hope to give everybody a platform to make their decision known. Our focus is on bringing about change, in situations where people feel powerless.”

On a not-so-political note, Thotpad can also be used in order to help make simple decisions. Don’t know what movie to watch? You can set up a “thot” and compare all the movies you have in mind, while utilizing the help and comments from your friends and colleagues.

The difference between Thotpad and the plethora of social networks on the market today, is that their stance is they really want to bring about change in our world. Thotpad is expecting to be a platform to let your voice is heard – if you think a corporation is mistreating employees – let it be known through Thotpad.

“We want every person in the world to feel powerful. That their Opinion Matters.

Anyone and Everyone should be able to bring about change (without getting their face punched in, i.e.).” 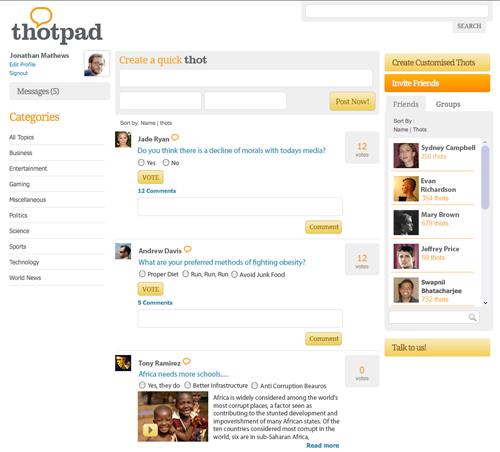