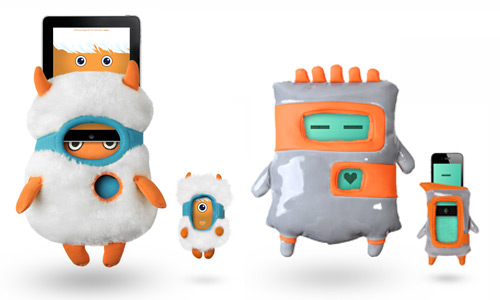 Kid’s toys have evolved so much since the days of G.I. Joe action figures and My Little Pony Dolls – now tablets and electronic devices are being coupled with tangible toys to make way for a new level of “play time”. Creative agency Carnation Group has just unveiled a genius design that turns your iPhone, iPad or iPod Touch into a lovable, huggable and furry plush toy for children.

The furry, yet friendly monsters are called Totoya Creatures that merge with iDevices to become an ultimate toy for kids. Coming packed with features, the app and toy lets kids be entertained but still be trained by playing chimes and tunes, providing voice effects, touch control learning and offering tactile commands. The furry creatures themselves can also be drawn on, used to sleep with, and maintained through combing of their fur. An endless set of interactive fun that goes beyond just an app!

There are four Totoya Creatures currently available: Robotto and YetYet for the iPad and RobX and YetX for the iPhone. The furry animals are sold for $79.90 (iPad version) and $49.90 for the iPhone Version. Check out the video below to see the cute animals in action.

Totoya Creatures are the cutest hybrid of soft toys and clever device usage we’ve seen to date. The cross-over between traditional toys and digital future is quickly becoming a regular occurrence and using children toys as a vessel we see some very creative and well put together products being put out. What do you think of Totoya Creatures? Would you trust your child with a toy holding your precious iDevice?