Not too long ago we shared Raise5, a crowdfunding platform that gives people who are short on cash but big on talent a creative way to raise money for their favorite charities and non-profit organizations. The team behind the terrific idea has since gone on to prestigious acclaim and winning the Virgin United’s first “Screw Business as Usual” contest. Building ideas for the betterment of society, community and culture is not only what inspires us but what we love to share and ideas similar to Raise5 are those that we hope continue to be developed regularaly. 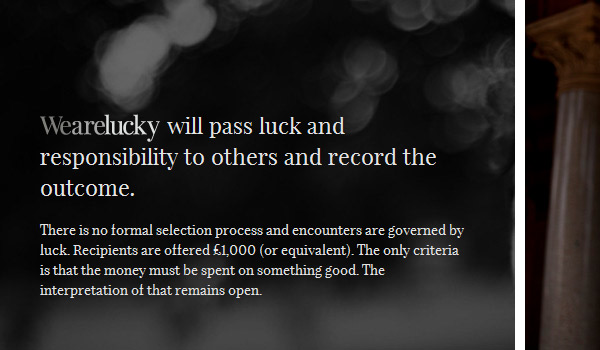 We Are Lucky is a project that comes from a similar way of “being” by giving back to a random lucky person in order to help sustain a more giving community. The proactive project asks the question – what would you do with a lot of money? The person whom is behind We Are Lucky spills on the site that He/She recently came into a lot of money and upon receiving the money decided to book a very expensive ticket to board a space ship. However, once sharing the idea with friends it was quickly realized the idea was selfish and embarrassing to their self, especially when the money could be used for something more creative and generous.

Thus, the very wealthy builder of the project decided to do something incredibly great with the money – spread it around. Every day We Are Lucky gives away £1,000 to complete strangers. There is no formal selection process and encounters are governed by luck. Recipients are offered £1,000 (or equivalent). The only criteria is that the money must be spent on something good. The interpretation of that remains open. On the site we are told:

“I wanted to share the responsibility hat came with it [money]. I would take a few photos, as a few questions and build a gallery of Lucky people and stories…. Wearelucky is a sincere documentation on the memorable characters I’ve encountered, the impact of the money and the remarkable stories collected along the way.”

“Paying-it-Forward” is a compelling way to live, and while companies like Raise5 look for creative ways for people to give back to community, the person behind We Are Lucky is using their own personal means to inspire others to bring positive change. The stories, thoughts and questions that We Are Lucky brings to the forefront when navigating through the site makes us ask: What would you do with a thousand dollars?