Today App.net was able to surpass its goal of $500,000 with well over 10,000 users already signed up to use the ad-free subscription based social network. Because of the high volume of requests the site is now giving Alpha access to users on a first-serve basis and you won’t have to pay until receiving alpha access. 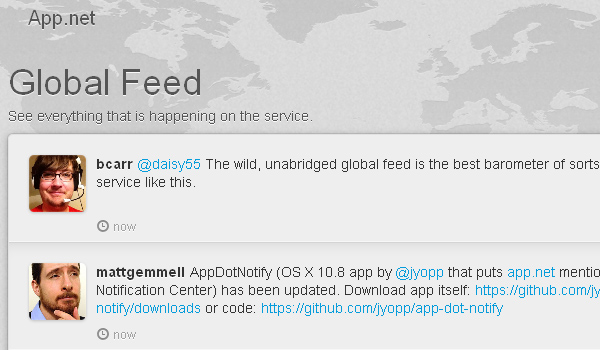 Everyone that pre-paid to use App.net via their self created Kickstarter-esque crowdfunding project effectively has pre-paid for a one-year’s membership to use the service. But why should anyone care about App.net? The people behind the project argue that ad-based services don’t benefit the user, but rather by being a fee-based social network funded by the user the focus is on providing them with the best product rather then another party. It’s safe to say that the site is talking directly at Facebook and Twitter, whom in many people’s eyes compromise user experience for the sake of raising capital via marketing channels.

Social networks are a numbers game, and having 10,000+ users already is a great start. But will people want to pay to use the site if their friends aren’t already on it? Time will tell if App.net can surpass Twitter and if the mass audience really wants to pay for an ad-free service all while providing optimum user services – a heavy set of pressure that will be scrutinized if something ever goes wrong.