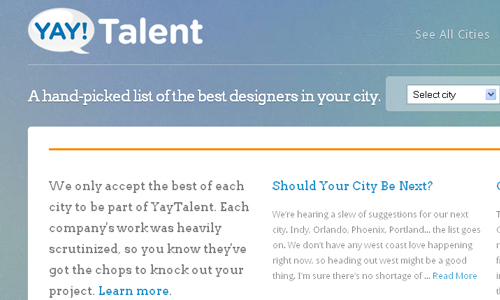 YayTalent is a place for you to find the best designers in your city (currently serving: Baltimore, Greenville, Philadelphia and Washington). Created by Michael Aleo (@MichaelAleo) in order to fulfill a self need of “want[ing] to make something I cared about and would benefit others. It didn’t need to make money, and if I made some friends along the way, I’d consider that a win as well.”

YayTalent connects talented designers with potential job opportunities and hopes to help the little guy instead of the larger agencies. Each company / designer featured on YayTalent is hand picked and scrutinized. They have either been exclusively invited or they applied and had been accepted after review. Thus, YayTalent is able to present a list of talented designers that you can pick from rather then going through a random search and having to filter through numerous unqualified creative’s.

We only accept the best of each city to be part of YayTalent. Each company’s work was heavily scrutinized, so you know they’ve got the chops to knock out your project.

Q & A with Michael Aleo

Who is Michael Aleo?
I’m an art director and designer at a growing PR firm in Washington, DC. Between my family and insane agency-like hours, I don’t have a ton of time for a side project, but I really wanted to squeak out something meaningful to the industry that I love. YayTalent is really an ongoing labor of love, as cheesy as that sounds.

How / who decides what companies are featured?
All the companies were selected by me, but ever since the Smashing Magazine article, I’ve had a few companies on the cusp. I couldn’t make up my mind if they should be accepted or not, so I’ve used existing members to see what they thought. That’s been a good system so far.

What made you want to create YayTalent.com?
Just the desire to make something meaningful outside of my client work. I love the clients I get to work with at my job, but being your own client can been really fulfilling and educational at the same time.

How do you see YayTalent.com evolving over the next few years?
Thinking years out is tough. My plans into the fall include being in a hand-full of additional cities. I really want the growth to be controlled and organic. There’s still some backend work to do, and I want to provide more to the members and users than I currently am, but that’s going to require capital.

What important feature does everyone need to know about YayTalent.com?
The best “feature” is really the scrutiny that each company went through – usually unknowingly. I scoured websites, looked up reviews of companies, asked former clients… Some of these companies went through a lot to get on here. I want to make sure it really is a list of the best talent – that isn’t just a gimmicky slogan.

Any final words for someone starting a new business?
You’re going to hit walls and fail multiple times along the way. Be ready for it. If you’re not failing, you’re not pushing hard enough. It’s what you do when you fail that separates you from others in your space.